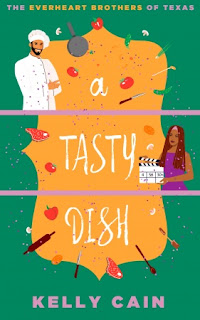 Hey, friends! It's been a minute, but I am powering through my TBR list and working to get reviews written. I just finished reading Kelly Cain's A TASTY DISH, and let's just say the book was delectable. Keep reading for the blurb, my review, the scoop on Kelly, and more! 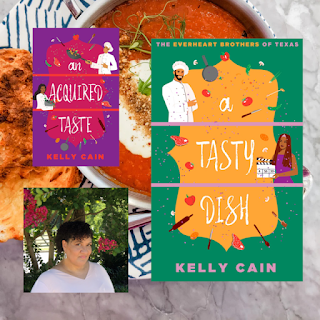 The show must go on…

Kasi Blythewood has spent most of her life in the shadow of her famous film producer father who’s deliberately kept her under his thumb with tough love. Ready to make a name for herself, Kasi secretly heads to Austin for a film conference to rustle up some financing for her dream project—an indie series that showcases cuisine from around the world.

When Kasi meets chef Declan Everheart, it’s instant lust spiced with an intriguing business opportunity. Declan’s father, a Michelin star chef, is interested in funding her film, but there is a sexy string attached—Declan must be a producer on her series. Not ideal. Kasi craves independence, and she knows business and pleasure never mix well, but she’s exhausted all other options.

Declan’s more than just eye candy and Kasi’s not blind. She immediately discovers Declan’s not just a natural producer and talented chef, he also shines on camera as the host. Can Kasi convince Declan to break away from his father and build the life he wants…with her? 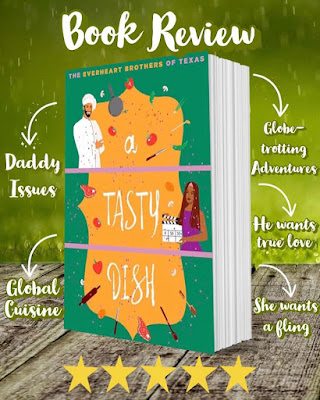 “I just know he’s going to be a hot mess throughout this whole endeavor. A thorn in my side. An arrogant temptation I’ll have to expend way too much energy fighting off.” ~Kasi Blythewood
Like the title suggests, A TASTY DISH was simply irresistible. This is Book 2 Cain’s Everheart Brothers of Texas series, and because I love show business, I was hooked on the premise of an independent filmmaker (Kasi) pursuing her dream project. But she’s presented with a frustrating (yet sexy) obstacle when a financier insists that his handsome son (Chef Declan Everheart) be a producer on her film. And therein lies the conflict.
Cain’s writing is quick, witty and packed with punch. I loved Kasi’s no-nonsense personality, which meshed perfectly with Declan’s cool, confident demeanor. Their chemistry felt so real, as did their interactions while navigating tricky business and personal endeavors. The fun chapter titles were a nice added bonus!
A TASTY DISH was a fantastic read that I devoured in two days. The clever punchlines (“I never met a morsel I didn’t like”), delicious dishes, complicated family dynamics and rousing character interactions made for a storyline I could easily see being adapted for film. Looking forward to the third installment in the series!
CLICK HERE for an excerpt, and CLICK HERE to order your copy! 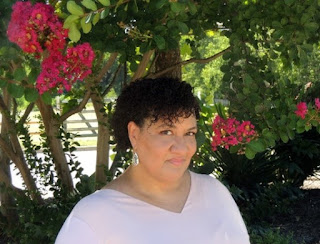 Kelly Cain is a native Californian but has spent the last couple of decades in Texas, currently residing in the live music capital of the world, Austin. Consequently, most of her books are set somewhere between those two locations.
Kelly writes multicultural romance with determined women directing their own fates, and the swoon-worthy men who adore them. She loves reading most genres but please don’t ask her to pick just one. However, she can pick her favorite book boyfriend – Will Herondale.
When she isn’t reading or writing, Kelly is most likely using a genealogy site to research her extended family, both old and new. Or cooking/baking something delightful.
She has two adult daughters, and a new granddaughter. Visit her website kellycainauthor.com for more info.
Posted by Denise N. Wheatley at 12:30 PM