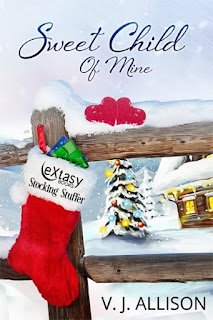 I am so excited to welcome back my good friend and fellow author, V.J. Allison! She is taking over my blog in celebration of her upcoming holiday release, SWEET CHILD OF MINE. Keep reading to check it out!
Hi everyone! V.J. Allison here! I’m so excited to be sharing the cover for my upcoming Stocking Stuffer, Sweet Child of Mine. The stars of my debut novel Stricken are back, and they’re about to meet someone special!

Ewan and Marti are hoping to have a quiet Christmas. Unfortunately, the universe has other plans…

Sweet Child of Mine 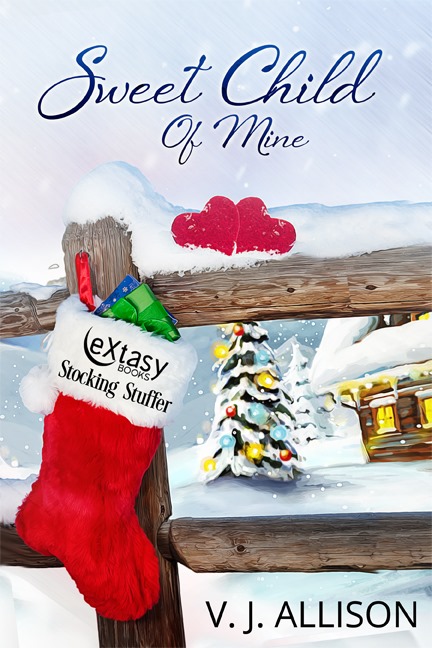 In the city on the harbour, miracles happen.

Ewan and Marti Campbell are hoping to have a quiet holiday season, their first as a married couple, and the last one before their new baby arrives.

A crisis at the real estate agency tosses a huge wrench into their plans, as does the sudden onset of Marti’s labour. As Ewan fights to get home before his child appears, more crises are flung at him. If he is to make it on time to help his wife bring their baby into the world, he’ll need a miracle…

Isn’t it gorgeous?  I am so in love with it! Angie did a wonderful job with the Stocking Stuffer covers this year. I am so pleased and lucky to be a part of that collection. I’m hoping to do another one in the future, maybe next year… IF I am not up to the eyeballs in finishing the rest of the Feathered Tartan Series or the Tri-Town one. (Knowing my wonky luck, I won’t have the time!)

I hope you love the cover as much as I do. It hit the inbox at a time when I needed a smile instead of a head desk…

Thanks for having me. Have a sneak peek on me!

Ewan Campbell shoved his frameless glasses higher on his nose with his left hand and clicked on the file on his work computer with the mouse under his right hand. The gold of his identification bracelet, a gift from his parents upon his high school graduation, quietly gleamed in the overhead lights, and its links gently clattered as he shifted his hands to the keyboard in front of him.

His dark brown eyes narrowed in concentration as he studied the file contents. Their entire fiscal year was there, minus the last month. How did the statistics for December suddenly disappear from the entire network? He had saved the files himself only yesterday, before starting his vacation. It was going to be three weeks of enjoying private time with his wife of eight months, Marti, and their first Christmas as a married couple.

It was also their last Christmas before they became parents. Their first child was due around the New Year, and although Ewan was eagerly anticipating their son’s arrival, he was looking forward to some quiet time with Marti. Their lives had been so crazy lately, between his trying to wrap things up at the agency for a while, and Marti preparing to give birth. The arrival of his parents, as well as his cousins Dana and Joshua, with Joshua’s wife Sybil, hadn’t put any dents in his plans. His family was staying at the Atlantica Hotel on Quinpool Road, not far from his office, and were only at the condo during the daytime.

An image of his wife rose in his mind. Even though she was tired from carrying an extra fifteen pounds, she was still beautiful. Her big hazel eyes always had a spark of wisdom and humour, and her reddish-brown hair had become thicker and wavier in the last few months. Her extended tummy and engorged breasts enticed and aroused him. He loved feeling the baby kicking and rolling around. It had become part of their nightly ritual. After eight years apart, knowing they were finally married was still a shock to him. He had been without her for so long, and they were now expecting their first child.

He grinned as he pictured the look on Marti’s face when she told him about the baby.

“Aren’t you going to say anything, Daddy?” There was a hint of snark and so much joy in her voice. Her eyes had sparkled in the dim light from the back door of his parents’ house and there had been an almost secret knowledge behind her touch.

Damn, he was missing her a lot that morning, especially since she was entertaining his family while he was called in to work on a crisis. Unfortunately, Marti’s cousins, Miranda and Ralph, who had started the company, were not answering their phones. It was Miranda’s duty to find that damn file, not his. He was supposed to be off work. She wasn’t. She owed him big time for this one. 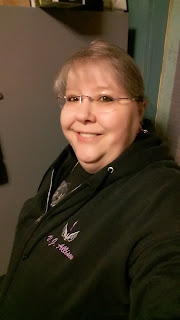 V.J. Allison was born and raised in southern Nova Scotia, Canada, and her work reflects her strong Maritime roots. She is a stay-at-home mother to a son on the autism spectrum, married to the love of her life, and “mama” to a rescued Maine Coon cat named Marnie. She has been writing various stories of novel length and short stories since her school days, and sees writing as a vital component to her life.

When she isn’t writing, she loves to read romance and science fiction novels (notably Star Wars); listen to music (heavy metal, rock, alternative); watch various crime and forensic dramas; watch science fiction television shows and movies; and spend time with her large family and many friends. This self-proclaimed geeky rocker chick is a warrior and advocate for various chronic illnesses including Occipital Neuralgia, Trigeminal Neuralgia, Diabetes, Migraines, and Glossopharyngeal Neuralgia. She is also an advocate for the prevention of animal cruelty and is a voice for Autism Awareness.