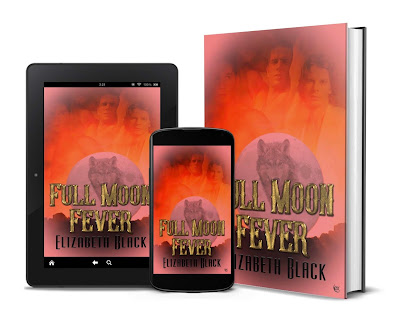 Welcome back, Friends! Today I am hosting my fellow eXtasy Books author friend Elizabeth Black, who’s here to share the deets on her latest novel, FULL MOON FEVER. This paranormal shifter romance is unique, exciting and sexy, and filled with shocking twists and turns. Keep reading to learn more about the book, check out a spicy excerpt, and find out how you can connect with Elizabeth across social media! 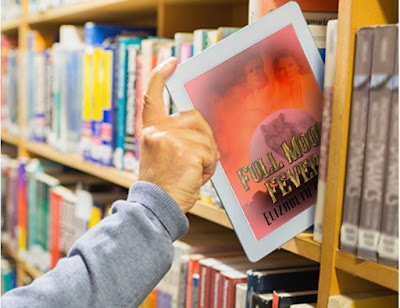 William Shakespeare said All the world’s a stage, but he hadn’t counted on shifters under a theater’s hot lights. Lovers Sam Hightower and Grant Newsome live for the stage. Although they have enjoyed the wanderlust of traveling theater for many years, each has grown tired of the road and wants to settle down. They also have a secret. As shifters and no part of any pack, they are lone wolves in every sense of the word. The full moon brings out the beast in them.

Even though their work as gaffers—lighting techs—puts them in contact with a large variety of willing, sexy men and women to share their love, they prefer men. They find a dancer, Luke Pearce, who makes their blood run hot, but Luke has a secret of his own to test them. Add scenic artists and lovers Charlotte and Lina to the mix, and you have a wild and sexy fivesome.

To spoil their fun and to their surprise, Sam and Grant discover another shifter in their midst, but this young person is so inexperienced and terrified she could expose them to the human hunters and get them killed. How can Sam and Grant protect themselves as well as the people they love?

As Sam pulled shutters on the lamps, he watched Luke circulate amongst the other dancers. Hoping he didn’t appear to be too stalkerific, he eyed up Luke’s muscular legs and taut derriere. His muscles rippled with each step, and once again, Sam was blown over by how such strength belied his grace. Another stubborn lamp refused to cooperate with his focusing. He gave it a swift yank to tame it into position. When he looked back at the stage, Luke was missing. Curious as to where he could have gone, Sam scanned the stage and house but didn’t see the dancer.
“If you keep staring at me like that, I’m going to have to take you right here behind the flats.”
Gone was the shy dancer who had accosted him only an hour earlier. The man commanded obedience. Sweat beaded on his face, arms, and chest, emitting an animalistic smell that made goosebumps ripple on Sam’s arms. While he bore a striking resemblance to Grant, elegant heat and grace poured from every inch of his luscious body in ways Grant could only dream about.
Luke grabbed Sam by the front of his black t-shirt, yanked him against that firm chest, and crushed his lips against Sam’s mouth. Gasping for air, Sam succumbed to Luke’s fevered embrace. The full moon peeking from behind clouds outside the window pulled at his feral core, and his muscles reacted to his arousal. They pulsed and lengthened, panicking
He who didn’t want to shift in the middle of the hottest kiss he’d had in months, not that Grant’s kisses weren’t hot. They were, but Luke was a shiny new lover, full of bright light and tingling sensations that danced across his lips like static electricity after walking across a plush carpet. His heart leaped as their tongues danced a duet.
His chest cramped as his shift increased, threatening to tear his shirt. Sam breathed deeply, trying in vain to calm his heated arousal. Sensitive to touch, his skin rippled at Luke’s feather-like finger brushings. Cool air chilled Sam’s arms and hardened his nipples as his skin trembled in savage delight. Luke’s arms wrapped around Sam’s waist, holding him as he swooned in Luke’s embrace.
Sam pressed his groin against Luke’s body. An erection strained against Luke’s leotard, pressing into Sam’s thigh. Sam lifted his leg to rub his thigh against it, and it jumped. Sam’s breath hitched with excitement.
When Luke pulled away Sam whimpered, eager to continue their kiss, but instead of ending their embrace, Luke’s lips pressed against his cheek. He ran those soft lips along Sam’s jaw until they pressed against the pulse pounding in his throat.
Luke fumbled with the zipper on Sam’s black jeans, lowered it quickly, and thrust his hand in. When his fist closed around Sam’s hard cock, Sam’s body tightened in his arousal. The hair on his head thickened and fell in his eyes. Sam shook his head, fending off the shifting once again. Fear filled his heart that he might turn while in Luke’s embrace, scaring him to death, but he refused to pull away from those arousing strokes.
Luke pulled Sam’s jeans down to his knees. He squeezed the head at the top of his erection, then fisted tightly at the base. Mouth firmly attached to Sam’s throat, Luke held Sam in place with lips and an arm as Sam’s vision spun with ecstasy. Lights flashed in Sam’s eyes, in time with his pounding heart. He heard a laugh here, a snicker there as people flitted past them, catching a glimpse of Sam caught in Luke’s erotic embrace.
Luke grabbed Sam by the arm and pulled him into a narrow space created by two flats hooked together at a cock-eyed angle. Luke went to work between Sam’s legs, stroking so quickly Sam feared he’d come all over his jeans. Luke’s free hand traveled from Sam’s chest to his hips as he lowered himself to face his groin.
When Luke took Sam’s cock in his mouth, Sam balled his hands into fists to keep from coming. Luke’s tongue flicked around his cock, side to side, making him so hard his breath caught in his throat. When Luke slipped one finger into Sam’s asshole, he could no longer contain his bliss, and he shot his load into Luke’s mouth, spurting and slamming his hips against his face. Canine teeth lengthened as his pulse pounded in his head, and he let out a deep-throated growl he cut off before it echoed against the walls.
Sam gripped Luke’s head with both hands, fucking his sweet mouth until his orgasm subsided. Moving from fevered thrusts to gentle strokes, he slid in and out of that warmth until he grew soft. Breathing deeply, he calmed himself. His teeth receded, and his coarse hair softened until it rested on his head.
Luke rose, wiping the back of his hand against his mouth. Sam blinked his eyes, willing away the glowing yellow that would surely terrify Luke. The muscles in his shoulders shivered as they receded into his resting, human state. His racing heart slowed as afterglow washed over him. Mellow and suddenly sleepy, he winked at Luke. The smile on Luke’s rugged face brought forth a grin of relief from Sam.
He has no idea how close he came to seeing me in my wolf form.
“Now that we’ve been properly introduced, I’m looking forward to midnight even more,” Luke said. “I’d love to get to know you and Grant better. Let’s take advantage while we can.” 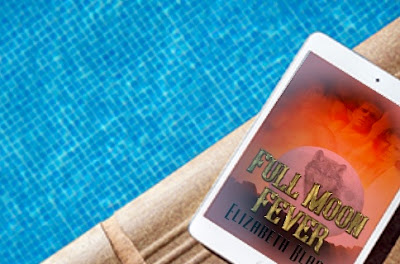 Want more? Click the links below to purchase your copy of FULL MOON FEVER today!