I am happy to welcome author Craig DiLouie to the blog today, who's here with his dystopian thriller, OUR WAR. Craig is a popular apocalyptic/horror and sci-fi/fantasy fiction writer who not only pens novels, but works as a journalist and blogger as well.

Read on to learn more about OUR WAR, Craig himself, and his exciting giveaway, courtesy of Silver Dagger Book Tours!

A prescient and gripping novel of a second American civil war, and the children caught in the conflict, forced to fight.

Our children are our soldiers.

After his impeachment, the president of the United States refuses to leave office, and the country erupts into a fractured and violent war. Orphaned by the fighting and looking for a home, 10-year-old Hannah Miller joins a citizen militia in a besieged Indianapolis.

In the Free Women militia, Hannah finds a makeshift family. They'll teach her how to survive. They'll give her hope. And they'll show her how to use a gun.

Hannah's older brother, Alex, is a soldier, too. But he's loyal to other side, and has found his place in a militant group of fighters who see themselves as the last bastion of their America. By following their orders, Alex will soon make the ultimate decision behind the trigger.

On the battlefields of America, Hannah and Alex will risk everything for their country, but in the end, they'll fight for the only cause that truly matters - each other. 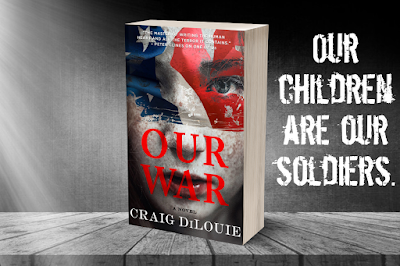 With booming sales for classic works like 1984 and The Handmaid’s Tale, dystopian fiction is enjoying a resurgence. These are stories in which a protagonist rebels (often unsuccessfully) against a brutal society inflicting suffering and injustice on its citizens, often in the name of some utopian ideal.
Is this any surprise? In the real world, growing economic inequality, environmental depletion and climate change, and the march of authoritarianism have made the world appear pretty bleak. Dystopia confirms our fears, whether political or existential, and manifests them in their worst possible outcome. Dystopian fiction is a warning.
I believe dystopian fiction is far more optimistic than we credit it. And I see its resurgence as a source of optimism. Yes, it’s bleak, but if we heed its warning, we can avoid this future. Yes, our hero may end up crushed, but we, the reader, will take up the fight. The mythical Cassandra’s prophecies may come true, but at least people are listening. As long as it doesn’t read as nonfiction, we’re still in pretty good shape.
My novel Our War similarly warns of a possible dark future America often feels like it is trending towards: a second civil war. As with other dystopian thrillers, I hope readers will come away warned and energized to resist this future.
In this novel, Congress impeaches and convicts a populist right wing president, who labels it a soft coup by the Deep State and refuses to leave office. A national armed protest by militias and other right wing groups snowballs into civil war, a war in which everybody fights and nobody wins.
This is the what but not the why. The why lies at the heart of polarization, fueled by alternate media, which is differing narratives defining what America is and should be. Without common facts or reality, without a single unifying idea, what is America? And without a single America, what does it mean to be a patriot?
A civil war would not play out like the last one, with states aligned for or against the institution of slavery and grappling with the balance of power as new states entered the Union. For Our War, my model was the Bosnian War of the 1990s, which pitted rural against urban and was largely fought by civilians. For years, the residents of a besieged Sarajevo and other cities lived in constant fear that over time became normalized. In America, rural areas are predominantly red, while urban areas are predominantly blue. Draw the battle lines there, and you can visualize a war whose first casualty would be American exceptionalism, as familiar consequences such as refugees, hunger, terror, and atrocities manifest in the fighting.
As with other dystopian fiction, Our War features protagonists fighting an oppressive force with utopian ideals, in this case the all-consuming war itself. The story centers on a brother and sister forced to fight as child soldiers on opposite sides of the lines surrounding a besieged Indianapolis. Hannah Miller, a war orphan, joins a local militia and believes in its cause. Meanwhile, a UNICEF worker and journalist work together to save her and other children by exposing the use of child soldiers. In the end, the war wins, and Hannah loses everything. But she will also find love and hope by rejecting all of the stories she’s been told and learning to fight for herself.
By the end of Our War, I hope the reader will find the same hope as Hannah and discover the same optimism as I found in her story. That they will take heed in Our War’s warning after closing the covers, and as with all good dystopian literature, stand ready to resist this possible future. 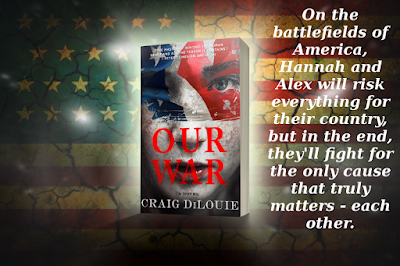 “This gritty, horrifying tale of hate … sprinkled with moments of love, will leave readers with haunting memories.” – Publisher’s Weekly

“Presenting a dark alternate reality that touches the seams of current events and a possible future, DiLouie offers an uncompromising view of … patriotism in conflict.” – Library Journal

“DiLouie brings depth to his dark vision of America.” – Barnes & Noble Sci-Fi & Fantasy Blog, listing Our War as one of the best releases of August 2019
“Harrowing dystopia.” – Kirkus Reviews, listing Our War as one of the best speculative fiction reads of August 2019
“Craig DiLouie’s prose is eloquent, deeply compelling, and poses a possibility that alerts us to protect our world against such possibilities as depicted in this imaginative story. It touches many chords of recognition, and that is yet another trait of a brilliant writer. Highly recommended.” – San Francisco Review of Books 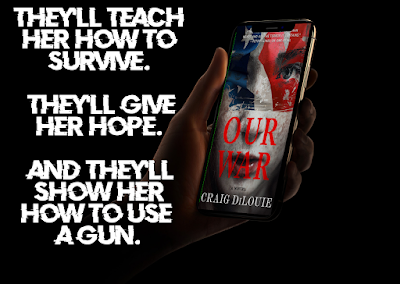 Craig DiLouie is an acclaimed American-Canadian author. Formerly a magazine editor and advertising executive, he also works as a journalist and educator covering the North American lighting industry. Craig is a member of the Imaginative Fiction Writers Association, International Thriller Writers and Horror Writers Association. He currently lives in Calgary, Canada with his two wonderful children.

Craig DiLouie is an author of popular thriller, apocalyptic/horror, and sci-fi/fantasy fiction.

In hundreds of reviews, Craig’s novels have been praised for their strong characters, action, and gritty realism. Each book promises an exciting experience with people you’ll care about in a world that feels real.

At https://craigdilouie.com/, you can find all of Craig’s major works, interviews, and hundreds of interesting blog posts. Be sure to sign up for Craig’s mailing list so you can stay tuned on new releases.