My Romantic Suspense Novel WARDS OF THE WOMEN Is Available Now! 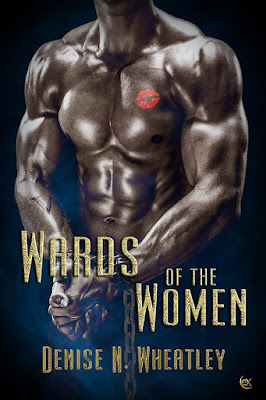 Hello Friends, and welcome back to my blog! Today is a good day, because my romantic suspense novel WARDS OF THE WOMEN has hit e-shelves! The book, which was released courtesy of eXtasy Books/Devine Destinies, is one of my favorite novels I’ve written to date as it has so many bold, exciting, mysterious elements. In the midst of all the intrigue, there’s plenty of romance and dark humor to boot.
Read on to learn more about WARDS OF THE WOMEN, where you can purchase it and how you can connect with me across social media! Also, stay tuned for an upcoming giveaway announcement… 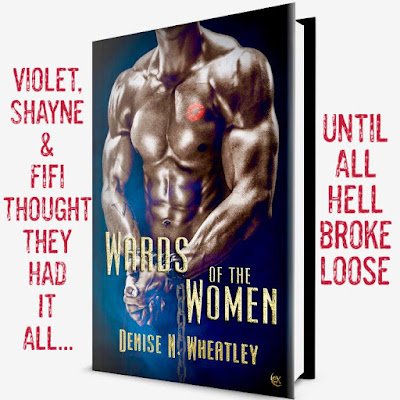 WARDS OF THE WOMEN Book Blurb
They bought men from a prison to fulfill their every need. What could possibly go wrong with such a simple little purchase?


WARDS OF THE WOMEN introduces three desperate girlfriends who, on the surface, appear to have it all, but underneath are in the midst of various crises. Mysterious deaths, extortion, straying husbands and illegitimate children have suddenly overtaken the lives of Violet Christianson, Shayne Wentworth, and Fifi Gentry. Eventually, when Violet becomes fed up with all of their circumstances, she does what any sensible woman would do—blackmails the state prison warden into letting each of them buy an inmate from the jail for their own personal fulfillment. But never in their wildest dreams did they imagine all the chaos that would ensue from a simple little purchase.
Keep reading for an exclusive excerpt! 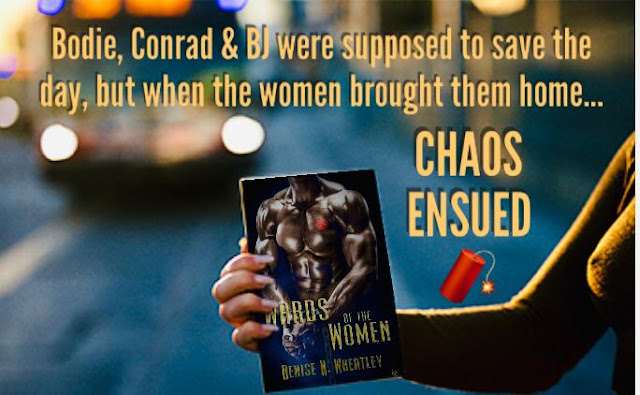 THE PRETENSE
Chapter One
Violet Christianson was a woman who knew what her name meant to most. Perfection. Everyone either wanted her, wanted to be her, or simply wanted her to go away.
Violet considered herself to be the most beautiful woman on her block, and never missed an opportunity to ponder her stunning image. At five-eight, she kept her lean, size two figure draped in outrageously expensive designer clothing at all times. Her dazzling, widespread hazel eyes were framed with long, lush lashes. Her retroussé nose had finally been perfected after several invasive surgeries. Her soft, plump lips accentuated high cheekbones when they puckered. Her raven hair swung so low that she could practically sit on it.
Violet’s husband, Elliot, was rich. The richest man on the block, to be exact. Elliot worked as a real estate developer and closed more big-money deals than a little bit. As a result, he allowed her to spend his money on whatever she wanted, and whenever she wanted. As he should have, considering how unsightly he was. Elliot’s pockmarked skin, hair plugs, bifocaled eyes, rat-like teeth, pot belly, and squat body were enough to send most into hysterics the moment they laid eyes on him. But Elliot was wise enough to hide his ghastly appearance behind his vast fortune. So by the time people noticed his looks, they’d already been so blinded by his Benjamins that his ugliness became a blur. Which is exactly how he said he wanted it.
Violet’s house was big. The biggest house on her suburban block, to be exact. It boasted a huge great room, six bedrooms, eight bathrooms, an Olympic-size pool, and even a room designated just for gift wrapping. The house had been designed by Jacques Lolique, interior decorator to the stars, which meant that her contemporary décor was nothing short of flawless—as was the house’s appearance, which was constantly being serviced by a small army of workers.
To top it all off, Violet was smart. Smart enough to have earned a doctorate in psychiatry. But rather than open a high-end practice and service the rich and famous, she’d gone with her heart and decided to work with inmates at the local state prison.
Violet Christianson. Beautiful, lucky, and charitable. All the reasons why most people either wanted her, wanted to be her, or simply wanted her to go away.
Chapter Two
Shayne Wentworth loved how the mere mention of her name brought smiles to most faces. She knew she may not have been the most beautiful woman on the block, but she certainly was the sweetest.
Shayne was an ex-pageant queen. Ex, simply because she now had five beautiful children and a wonderful husband to look after. If it weren’t for them, she could certainly still be competing. Because, after all, when she looked at herself, her bright-green eyes still danced. She made sure her straight white teeth still gleamed. And her creamy, clear skin still glowed. As for her shoulder-length platinum blonde locks, all she’d have to do was pull them out of the bun that she usually wore and shake it out a bit. As for her figure, all it would take was a crunch or two to get back in fighting shape. And as for the rest? Nothing a tube of lip gloss and a dazzling evening gown couldn’t fix. So, all things considered, she was still a contender.
Shayne’s husband may not have been the richest man on the block, but he certainly was the most powerful. Russell worked as a criminal defense attorney and had a reputation for being ruthless and cutthroat. At home, however, he was a different man. Russell was a gentle pussycat who worshipped his wife and doted on his children. He allowed Shayne to stay at home while he worked to provide for the family. Which was good for her, considering she knew nothing beyond the world of pageantry.
Shayne may not have had the biggest house on the block, but the one she did have was bursting with energy. Her sixteen-year-old son, Matthew, was following in his father’s star-studded footsteps by playing football at Russell’s high school alma mater. Her fourteen-year-old daughter, Sloane, was a straight-A student who’d managed to skip two grades and was taking accelerated courses in high school. Her twelve-year-old son, Ryan, already knew he wanted to be an attorney, so he spent every possible moment with his dad at the law firm. Eleven-year-old Cadence was carrying her mother’s torch by competing in statewide beauty pageants and winning numerous trophies and prizes. And Basil, Shayne’s ten-year-old son, was simply brilliant. His wit, intellect, and cunning sense of humor amazed all who knew him.
Shayne Wentworth. Nurturing, fortunate, and fulfilled. She may not have had the best on the block, but at least she had her family.
Chapter Three
Fifi Gentry knew that the mere mention of her name meant only one thing to most. Business. And while she may not have been the sweetest woman on the block, she certainly was the feistiest.


Fifi was a go-getter. A five-foot dynamo. A twenty-eight-year-old spitfire who was too busy fighting for the rights of others to worry about trivial things. Like looks, for instance. Fifi would much rather spend her time amending proposals than getting a makeover. She did, however, put forth an effort to appear presentable, considering she wanted to be taken seriously.
Fifi never missed her monthly hair appointments to have her sleek brown bob, which complemented her almond-shaped eyes, dyed and trimmed. She cleansed her flawless olive skin with plain water and smoothed Vaseline over it every night, which was her secret to keeping it radiant. She followed a strict macrobiotic diet and practiced Ashtanga yoga to help keep her enviable size zero in shape. And she did take the time to lengthen her lashes with mascara, brighten her cheeks with blush, and accentuate her lips with gloss every day.
Fifi may have been the only woman on the block without a husband, but her boyfriend certainly was the most influential man in the state. Senator Edward Hynes was Fifi’s current beau, and the buzz amongst politicians was that he’d be the one to beat during the next presidential election. And even though Fifi and Edward didn’t share many of the same political views, she couldn’t have been prouder of him.
Fifi’s house may not have been bursting with energy, but at least it was all hers. She still lived in the home she’d grown up in, which her parents had been kind enough to give to her. She hadn’t changed much by way of décor because she loved having the feel of her parents and memories of her childhood surrounding her. And the house would be perfect for raising a family in, which she was definitely looking forward to doing one day.
Fifi may not have the goods to compete in beauty pageants, but her advocacy work more than made up for that. Fifi worked as a lobbyist assistant, fighting to have bills passed that would enforce tougher child protection laws. She was currently lobbying to have convicted child molesters serve harsh, mandatory jail sentences, then once they were released, have electronic tracking devices implanted inside their bodies so their whereabouts could be traced at all times. More importantly, she was working to have a bill passed that would force child molesters to undergo physical castration.
Fifi Gentry. Purposeful, altruistic, and unrelenting. She may not have had the most on the block, but at least she had a mission.
THE TRUTH…
Want more? CLICK HERE to order your copy of WARDS OF THE WOMEN now! 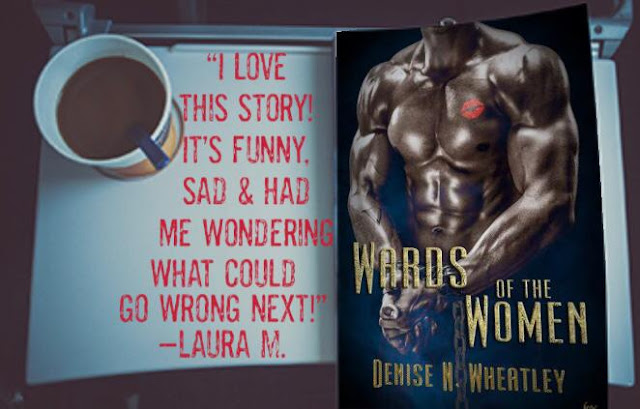 The early reviews are in! Here’s what readers have to say about the book:


“WARDS OF THE WOMEN uniquely explores the lives and misfortunes of three strong, distinctly-written female characters. The book is bold, the tone is inimitable, and the various twists and turns that occur throughout will be sure to captivate readers and keep them on the edge of their seats. The concept is compelling, outrageous and unusual, and just when you think that the characters have gone too far, they somehow manage to make a way out of no way and come out on top.”
“Loved this book! It was truly original and I could not put it down. Enjoyable and easy read.”
“I love this story! It’s funny, sad and had me wondering what could go wrong next.” 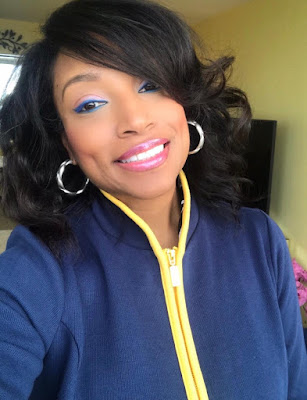 *Stay tuned for deets on the WARDS OF THE WOMEN book tour courtesy of Silver Dagger, which will include exciting giveaways!
Posted by Denise N. Wheatley at 2:23 PM