SHE GETS A HAPPY ENDING is Available for Preorder! (Blurb, Excerpt and More Inside) 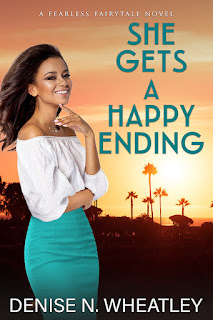 Happy Valentine's Day, friends! I am so excited to share with you deets on the third and final book in my Fearless Fairytale series, SHE GETS A HAPPY ENDING. The novel hits shelves on March 3rd and is available for preorder now. Keep reading for the blurb, an excerpt, a recap of books one and two in the series, and more! 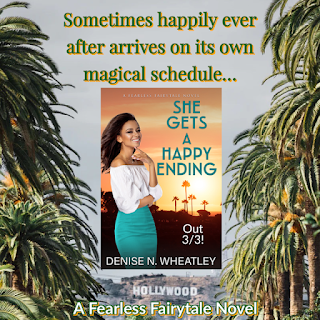 Sometimes happily ever after arrives on its own magical schedule…

Writing the final book in my Fearless Fairytale series was bittersweet. Bitter in that Devon and Ryan's journey has come to an end and I'm going to miss them. Yet sweet considering they both find their happy endings. Getting there, however, isn't easy.

In book three, Devon's career is thriving, she’s dating the love of her life, and she just sold a Christmas script, With a Bow on Top, to a network. Ryan, on the other hand, hasn’t been so lucky. He’s been out of work ever since his sitcom was canceled. The pressures of Hollywood are weighing heavily on the former leading man, leaving him burned out and struggling to regroup. When the burden becomes too much to bear, he and Devon decide to call it quits.

Devon is heartbroken but relieved when she jets off to the small, festive town of Leavenworth, Washington, to begin shooting her holiday movie. But that relief quickly turns to grief when the lead actor drops out, and producers replace him with none other than Ryan.

Remaining professional on set proves to be challenging for both Devon and Ryan as they wade through their unresolved relationship issues. But amid all the drama, they realize there’s still love between them. In the end, the pair must figure out whether that love is worth pursuing a second time around. 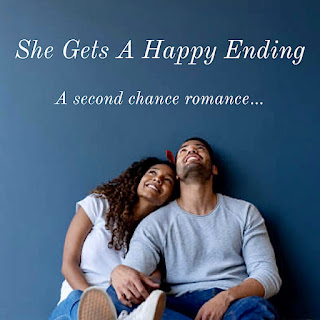 One of the most challenging scenes to write for this book was Devon and Ryan's breakup. I don't want readers to pity Devon, nor do I want them to hate Ryan. My goal was to explain the situation in a way that would garner compassion and understanding. That way, as the plot unfolds and the pair explore all that went wrong in the relationship, readers would root for them rather than hope they split for good. Is their relationship worth salvaging? You'll have the read the book to find out! (Hint: I do love a second chance romance...) In the meantime, check out this excerpt that'll give you a peek into the breakup:
“Ryan?” Devon said, her tone unsteady. “Are you here?”
He didn’t respond.
Her chest tightened at the silence in the air. She hadn’t seen him in almost three weeks. Their worlds had been turned upside down ever since their television show, Here To Stay, was canceled last season.
Devon was busy writing for a new hit TV show called Out For Blood, about a human trafficking ring and the group of vigilantes aiming to take them down. During her free time, she’d teamed up with Lena, the show’s head writer, and written a Christmas script that was recently picked up by a network.
The majority of Ryan’s time was spent working the grueling auditioning circuit while running a gym that he co-owned with his best friend, Vince.
Conflicting schedules had made his and Devon’s frequent date nights a thing of the past. But it wasn’t just their calendars keeping them apart. The imbalance between her thriving and his barely surviving had caused tension in the relationship. He no longer felt good enough for her. Devon’s endless support and encouragement couldn’t prove otherwise. Her success had left her feeling guilty rather than proud.
She rushed into the kitchen and dumped her things on the table, then glanced at the time on the microwave. It was almost seven o’clock. Ryan had told her he’d be here by six, waiting for her to get off work.
Devon hadn’t heard from him since his meeting with a casting director early that morning. Ryan was up for a lead role in a new Netflix series. He’d been invited to audition by the show’s executive producer. Devon was so confident he would get the part that she’d picked up his favorite wine and sashimi dish on the way home, with plans to celebrate.
But it appeared as though he hadn’t shown up.
Devon ran to the bedroom. He wasn’t there. Nor was he out on the balcony.
She snatched her cell phone from her back pocket. He hadn’t called or texted.
“Did you forget we had plans?” she muttered while dialing his number.
She noticed a note taped to the front door. She disconnected the call just as his voicemail picked up.
“What in the hell is this?”
She snatched it down. Her hands trembled as she scanned the words.
Dev,
I’m sorry I am putting this in a letter. But I’m drained and don’t have it in me to talk face-to-face. I found out today that I didn’t get the part. The producers decided to go in a different direction.
This one hurt. I feel like I no longer belong in the acting game. And for some time now, I’ve also felt as though I no longer belong in this relationship. The pressure to be a good partner while struggling to keep my career afloat is too much.
I need a break. From everything. Including us. I have to figure out exactly what I’m doing with my life. Again, I apologize for ending things this way. I hope you understand.
I know you’ll be leaving for Washington soon to shoot your movie. Good luck. Know that I am happy for your success. But now it’s time for me to try to reclaim mine.
Take care,
Ryan
Devon's arms fell by her sides. She leaned against the door, staring straight ahead. Her living room grew blurry through her tears.
She slid to the floor, whimpering while rereading the letter.
I need a break. From everything. Including us.
She’d tried everything in her power to help Ryan. Running lines with him, consoling him when he didn’t land parts, massaging his sore back after hours-long auditioning days. Whatever he needed, she’d tried to give it.
But her all wasn’t enough. And just like that, they were done. 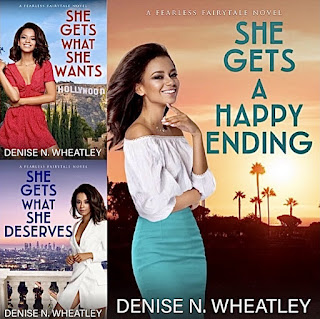 Whew! I still get a little teary when I read that scene...
Devon has come a long way to get to where she's at in SHE GETS A HAPPY ENDING. Her journey began back in small-town Berman, Indiana, where she worked an unfulfilling job at a local newspaper and pined after her longtime crush, Jason. When Jason turned her down cold, she threw caution to the wind and moved to LA to pursue her dream of writing for television. All that plays out in book one of the series, SHE GETS WHAT SHE WANTS.
In book two, SHE GETS WHAT SHE DESERVES, we finally see Devon come into her own. She earns a seat at the writer's table on the hit tv sitcom, Here To Stay, and takes her friendship with Ryan, who stars on the show, to the next level. But Devon finds herself fighting to be heard in the writers room and terrified that her boss will find out about her forbidden workplace romance. All that takes a backseat, however, when Here To Stay is threatened to be canceled.
The storyline continues in book three, SHE GETS A HAPPY ENDING. I've shared with you a bit about the plot in my own words. Here's the official blurb from Tule Publishing:
Devon Jacobs’s star is definitely in orbit. Despite the cancellation of her weekly sitcom, she lands a job writing for a television drama, then sells her Christmas script to the perfect producer. But her boyfriend, Ryan Roberts, is having no such luck. Down on himself and burning out from all the auditioning, his frustration puts a strain on their relationship, and suddenly they find themselves calling it quits.
A movie shoot in the holiday town of Leavenworth, Washington, is exactly the mental break Devon needs. Until their leading man quits and the producer replaces him with none other than Ryan. Finding the right level of professionalism isn’t as easy as it sounds, especially when this opportunity means everything to their careers—and it’s becoming more obvious with each passing day that neither one of them is successful in saying goodbye.
Can Devon and Ryan find a way to combine their dreams and tie a bow around their relationship—this time for keeps? 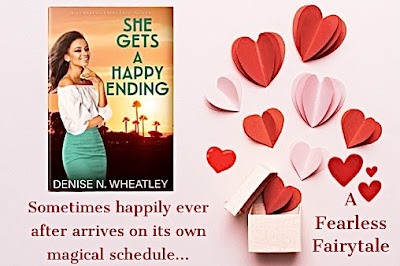 I hope that you'll check out my Fearless Fairytale series and preorder your copy of SHE GETS A HAPPY ENDING. Stay tuned as I'll be making several guest appearances, participating in blog and promotional tours, and stopping by podcasts and live shows in celebration of the book's release. There will also be plenty of giveaways. To keep up with all of that, follow me here. If you'd like to check out more of my work, CLICK HERE.
Thank you for stopping by, and I hope you have a wonderful Valentine's Day. Be sure to do something special for yourself! 💘
Posted by Denise N. Wheatley at 1:39 PM