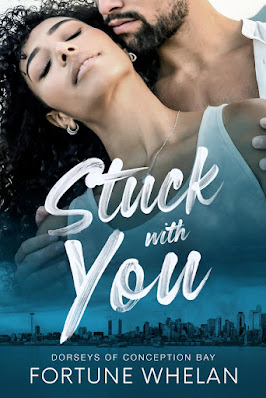 Hey, friends! I am so excited to welcome my friend and fellow Tule author, Fortune Whelan, to the blog today. Fortune is here to tell us about her upcoming romance novel, STUCK WITH YOU, which is Book 1 in her DORSEYS OF CONCEPTION BAY series. Keep reading for all the deets on the book as well as Fortune herself. And stay until the end for a juicy excerpt! 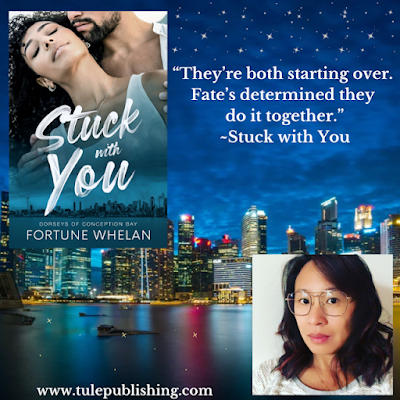 They’re both starting over.
Fate’s determined they do it together...
NHL all-star Clark Dorsey is still at the top of his game, but he’s done with hockey. The night of the championship, Clark announces his retirement and returns to Seattle to spend time with his sick brother and figure out his next move. He needs to unwind, but his interfering brother sets him up by renting half of their shared condo to a beautiful, opinionated and fascinating woman.
Nurse Leena Lopez is done with the spotlight. When her whirlwind fairy tale romance ends in a cheating scandal, Leena’s suddenly broke, alone and hounded by paparazzi in a new city. Desperate to put down roots, Leena says yes when a patient offers her the condo he shares with his Canadian hockey star brother. She can ignore the teenage crush she had on Clark Dorsey—he won’t even be in town.
But Clark arrives and they’re both thrust back into the headlines they’ve been desperately avoiding. Can they figure out how to be alone together? Do they want to?

Clark cracked his neck, squared his shoulders, and raised his fist to knock on the door. But he couldn’t bring himself to do it. Not yet. One more minute and then barge in, like he owned the place. Because he did. Own the place. Before he could and without warning, the door disappeared from in front of him, and a forehead knocked him in the chin.
She wore scrubs and her brown curls were pulled up into a high ponytail, but there was no mistaking her. Leena Lopez. What the hell was Leena Lopez doing opening the door to his apartment? Confused, he stepped back and scratched at his temple. “What are you doing here?”
“Very funny. I live here. Did you follow me?” She stepped back too, placed her hands on her hips, and eyed his boxes and trophies. “Wait. What are you doing here? Is this all the stuff from your SUV?”
“I didn’t follow you here. I live here. My name is on the deed of this apartment.
***
“Of course you do. I knew that.” She didn’t. Leena hooked her thumbs into her knapsack shoulder straps and backed away shoulder straps and backed away toward the elevator. “I’m on my way to work. It’s my first day. Let’s definitely catch up—get acquainted—later? Make yourself at home. Obviously. You live here.”
She spun, repeatedly jabbed the down button for the elevator, and prayed this one time for the elevator to skip its usual, inexplicable extra minute on seven. Unless it was absolutely essential for her to ride the elevator, like instances where she had too many shopping bags to carry, she avoided it.
The day she moved in, she used the elevator to move most of her things, and she couldn’t understand why the car kept stopping on the floor under hers. The first time she chalked it up to someone getting tired of waiting and opting for the stairs. By the third she entertained the idea of a ghost and by the tenth, she clocked the elevator’s sojourn on seven at exactly fifty-six seconds, every time. If the single elevator made a stop at every floor on the way up and down, it took ten minutes, and it didn’t take more than three to climb the stairs in either direction. In the end, she decided the elevator didn’t like its job, and was purposely slow to discourage passengers. It was as plausible an explanation as any.
She glued her eyes to the brass number plate above the elevator. When number four lit up, she considered launching herself sideways into the stairwell door to her right, but Clark Dorsey, her apparent roommate, hadn’t moved from where he stood in front of her door—their door. Sharing a door with him felt wrong somehow. His gaze burned the back of her neck, and she pulled up the collar of her coat to deflect the heat. As much as she wanted to turn around and say something, her cheeks scorched red-hot too. She asked the universe for one thing. One thing! To never run into Clark Dorsey ever again. If she could feasibly write a bad review for the universe without fear of karmic consequence, she would.
Where to Buy Links:
Stuck With You at Tule Publishing
Amazon Kindle
Kobo
Apple iBooks
Barnes and Noble
Amazon CAN 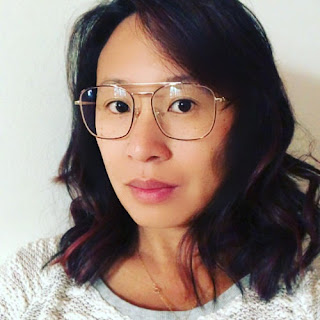 Fortune is a raconteur with a penchant for telling lies (or storytelling, whatever), mostly to entertain herself. She writes small town sweet contemporaries, mafia adjacent dark romances, Grey's anatomy inspired love stories, and intense romantic suspense. Her stories have an energy that will take you for a ride. So, get in and buckle up.