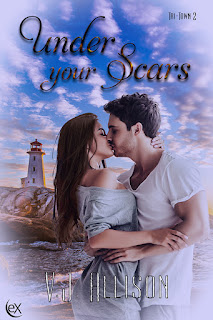 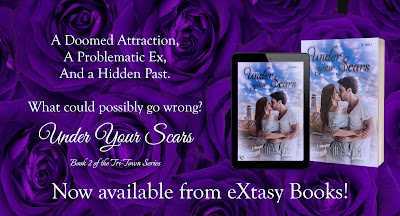 It’s official: Under Your Scars (Book 2 of the Tri-Town Series) is now LIVE at eXtasy Books! Here’s a few juicy details about this next story in the Tri-Town series… And a sneak peek at an interaction between Seth and Alexis!

Get it now at eXtasy Books!


Under Your Scars
Book 2 of the Tri-Town Series


Tagline: You can run from your past, but it will catch up to you eventually.

Alexis has that special something about her that Seth can’t fathom. His friend Mirabelle’s new employee is even prettier than the merchandise she sells. Too bad she’s distantly polite when he tries talking to her.

Alexis is attracted to Seth, but she’s in hiding from her past and her mistakes. Getting involved with the one person she's attracted to could blow her cover.

When they’re forced to work together, their libidos ignite. Alexis is terrified to open up and give in to her feelings for Seth. If he remembers that night five years ago, he’ll never speak to her again.

It becomes a question of whether Seth will expose her and force her to keep running, or if he'll help her face her past. 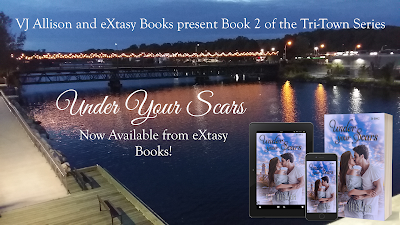 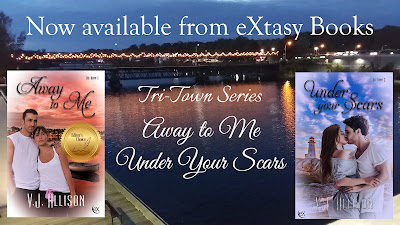 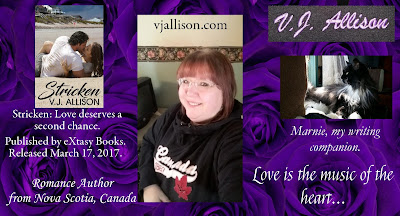 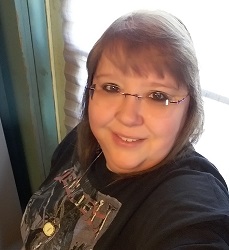 Small Town Romance with a Twist.
V.J. Allison was born and raised in southern Nova Scotia, Canada, and her work reflects her strong Maritime roots. She is a stay at home mother to a son on the autism spectrum, married to the love of her life, and “mama” to a cat named Marnie.
She has been writing various stories of novel length and short stories since her school days, and sees writing as a vital component to her life.
When she isn’t writing, she loves to read romance and science fiction novels (notably Star Wars); listen to music (heavy metal, rock, alternative); watch various crime and forensic dramas; watch science fiction television shows and movies; and spend time with her large family and many friends.

Advocate
This self-proclaimed geeky rocker chick is an advocate for and warrior of various chronic illnesses including Occipital Neuralgia, Trigeminal Neuralgia, Diabetes, Migraines, and Glossopharyngeal Neuralgia. She is also an advocate for the prevention of animal cruelty and is a voice for Autism Awareness.