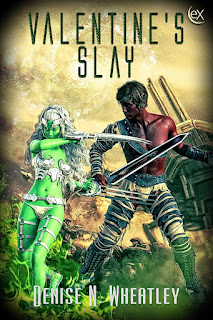 Happy Valentine's Day, Friends! In celebration of the holiday, I have written a steamy sci-fi/fantasy novelette titled VALENTINE'S SLAY, courtesy of eXtasy Books/Devine Destinies. Keep reading for all the deets, including a blurb, juicy excerpt, and order link. Then stay tuned for a fun giveaway I'm hosting courtesy of Silver Dagger Book Tours!

In the land of Zanalia, Valentine’s Day is a celebration of war. When two of the realm’s fiercest foes go head-to-head over the sacred ritual, sparks unexpectedly fly, igniting an explosion of love, lust, and ultimately, broken traditions.

In a world filled with warriors, Valentine’s Day means war for the creatures of Zanalia. Mina, queen of the disciplinarian tribe, is responsible for spearheading attacks on the land’s worst enemies.

Spike, the son of king Theo and Mina’s biggest adversary, no longer believes in provoking battles on this love-filled holiday. He secretly encourages the Zanalians to put away their weapons and spend time with their loved ones instead.

The absurd suggestion goes against the territory’s oldest tradition and is rejected by many, to the point where Spike receives death threats. His father grows worried for his son and orders Mina to stage his kidnapping, then provide him with personal, around-the-clock protection.

Mina is infuriated by the mission as she’s being forced to protect a disloyal traitor. She vows to make Spike’s time with her as torturous as possible until she unwittingly finds pleasure in the pain she inflicts upon him, while he seemingly relishes in her harsh punishments. Emotions run high between the pair, and Mina realizes that Spike’s wish to spread love this Valentine’s Day just may come true after all. 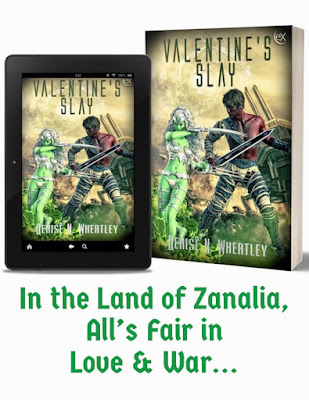 Mina slowly climbed the winding, glass staircase inside of Spike’s compound. She pressed her back against the wall while watching every angle around her. In order to gain access to his home, Mina had utilized her narcoleptic machine gun, which was capable of putting its victims to sleep within less than a second. She’d shot several darts into the necks of four armed guards manning the exterior. According to her surveillance, there were only two guards inside of the complex. Mina planned to quickly knock them out, grab hold of Spike, and get him inside of the transporter.

When she approached Spike’s master bedroom, Mina pressed her ear against the door and listened as he and the creatures spoke in hushed tones. She slowly turned the knob and cocked her gun. The minute she swung open the door, Mina shot a dart into the neck of a watchman standing to her left, then the one to her right. Spike made a run toward the bathroom, but just as he reached the threshold, she fired a dart into his throat. He fell to the floor, and along with the other two guards, fell into a deep, snoring slumber.

Mina swooped in immediately, lifting Spike up off the floor, carried him out of the house and threw him inside the transporter. There was a comfortable velvet couch that had been placed in the back, but instead of lying him there, she dragged his body onto a hard, cold iron bench.

“You’re going to pay for disrupting my retirement as Queen of the Disciplinarian Tribe and betraying our beloved Zanalian tradition,” she said, her wicked tone filled with satisfaction.

Mina stripped Spike down to his scant undergarments. She handcuffed his wrists and ankles, then wrapped a heavy metal chain around his waist and secured it with a huge padlock. As he lay there knocked out cold, she looked down at his muscular body, handsome face, and soft, vulnerable expression.

“Don’t you dare start that,” Mina told herself, shaking off the feeling of lust that briefly overcame her.

She headed to the front of the transporter and typed the name of a secret back road into the navigation system that would lead them far away from Spike’s compound and in the direction of her quarters. Once a map popped up on the overhead screen, Mina signaled to the horses that it was time to take off then sped away into the night.

Mina’s ears perked up while she listened to Spike scream from the back of the transporter.

“What is going on?” he screeched. “Where the hell am I? Somebody, please, help me!”

“Ugh,” Mina moaned, ignoring his pleas. She grabbed hold of the steering bar and maneuvered the vehicle through a dark, dank, hilly road. According to her digital dashboard, they had been traveling for well over three hours. Mina had been in constant contact with Theo, who warned her to remain on the outskirts of Zanalia as Spike’s protestors were circling every inch of the land, waiting to attack him the moment he appeared.

“Whoever is holding me captive,” Spike called out, “you must release me at once! Do you know who I am? Do you know who my father is? I am the prince of Zanalia, soon to be king!”

“Please, shut up,” Mina muttered, unsympathetically. She pulled the steering bar back, anxious to get through the swampy territory and onto smoother terrain. When the chargers slowed down instead of speeding up, Mina realized they had yet to stop and take a break and assumed they were exhausted.

She directed them toward the side of the road, then grabbed several buckets of food and water and carried them outside. Once the chargers began feeding away, she hopped back into the transporter and headed toward the back where Spike was being held.

“What the…” he yelled the moment he saw her. “What is going on here, Mina? Where are we, and why am I in shackles? Release me, now! I insist!”

“Unfortunately for you, Spike, that is not going to happen. You see, because of your little attempt to disrupt Zanalia’s Valentine’s Day tradition, your father ordered that I kidnap and hold you captive until the holiday is over and our battle against Raynalium is complete. If you’re angry, be mad at yourself, but you should actually be thanking me, because I’m the reason you’re still alive.”

Spike glared at Mina. “If you do not remove these cuffs and chain at once, you will forever regret it,” he spewed, rattling the restraints to the point they almost tore into his skin.

“If you keep threatening me, you’ll be the only one with regrets.”

Spike tried to sit up, but the chain around his waist forced him back down onto the freezing bench. He jerked his head toward Mina and let out a resounding roar.

“My guards will know where to find me,” he told her. “The second they free me, I swear I’m going to kill you!”

She walked over to Spike and leaned in so closely her face was mere inches away from his.

“You know what? I was going to play nice with you. Well…semi-nice. But now? Playtime is over. You’re going to be sorry for the way you just spoke to me.”

Mina sauntered toward the front of the transporter, ignoring Spike’s cries as he called out her name. She grabbed the metal suitcase she’d secretly packed before heading out on the mission in the event she’d need its contents. Judging from Spike’s rebellious behavior, Mina realized that she had done the right thing.

“What are you doing?” he asked when she opened the case and pulled out two steel clamps. “What are those?” 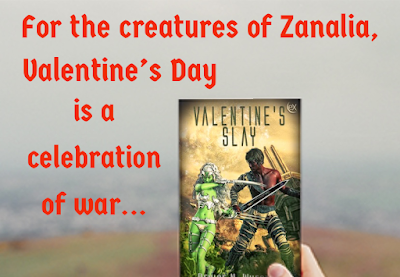 *UPDATE: My giveaway is now closed. Congratulations to the winners, Viki S. and Willie Brownie. I hope you enjoy your books and gift cards!